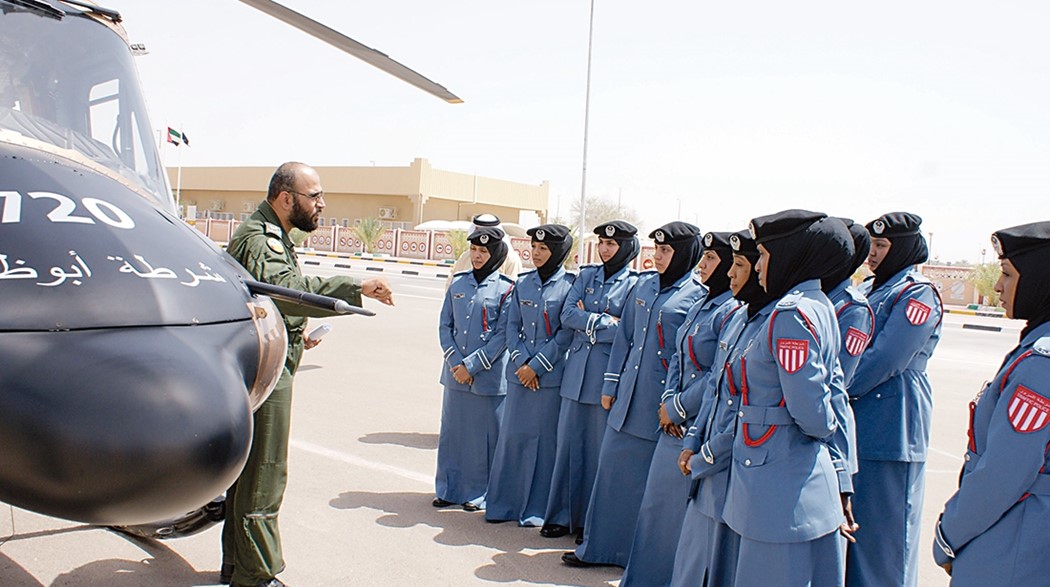 The female officers of Ras Al Khaimah Police confirmed that the Emirati women were able to prove their merit, distinction and excellence in various fields and sectors, including the police field in its various aspects, after the leadership of United Arab Emirates has been keen to make them main partner in the improvement and development process.

“The UAE celebration of the Emirati Women's Day, and allocating a day to celebrate her accomplishments, is a strong evidence of the great confidence of the leadership in the capabilities of the Emirati women, and their competence to succeed and achieve  excellence in various aspects and fields,” said Captain Moza Al-Khabouri of Ras Al Khaimah Police.

She stated that the police field is one of the fields that Emirati women have distinguished with their remarkable presence, as women has participated in various specializations that were made available to them to enter the police field along with men. Thanks to the great and unlimited support, they were able to prove their ability and competence in this field.

“UAE has opened the doors before women to exist in various fields of work, including police missions, after the state introduced many specializations in the fields of police work such as specialized studies and field training, and then the women assumed the missions and various practical departments, and this is a clear evidence of their belief in their ability to achieve success,” said First Lieutenant / Abda Al Shehhi of Ras Al Khaimah Police.

She emphasized that allocating a day for the Emirati women during the year is a great indication of the keenness of the wise leadership to continually provide the support to them, to reach the high police ranks that they reached today thanks to her constant endeavors to prove her ability to perseverance in work and development of her various skills.

“Today, Emirati woman is a role model in success, excellence and perseverance, as she has taken advantage of all opportunities available to her to enter different fields of police work and various scientific and professional specializations,” said Senior Assistant / Mervat Al Zaabi at Ras Al Khaimah Police.

She stated that the UAE, since the establishment of the Union by the late Sheikh Zayed bin Sultan Al Nahyan, may he rest in peace, and his brothers, the rulers of the Emirates, has emphasized the importance of women’s role in building the communities, and always bets on their ability to undertake various types of tasks alongside men.

The State emphasized that Emirati women always receive continuous encouragement from the leadership, the first supporter for her, Her Highness Sheikha Fatima bint Mubarak, President of the General Women's Union, President of the Supreme Council for Childhood and Motherhood (SCMC) and Supreme President of the Family Development Foundation, as she always believes in the ability of Emirati women to prove themselves in various fields, and to perform her role dedicatedly, sincerely and distinctively.

“Since the establishment of the Union, the Emirati women have been able to achieve consecutive successes and have been in the forefront, not only at the level of the UAE, but also at the global level. The woman obtained unparalleled support by which she was able to overcome the obstacles and difficulties to reach the high positions,” said Corporal Sheikha Al Zaabi, of Ras Al Khaimah Police. “The UAE has been keen on integrating the Emirati women in various fields of work, including the police field, where the State was able in the beginning to find the specializations for her in various fields to enable her to engage therein and to be able to realize the work entrusted to her, and established the police colleges, and was able to find the fields of work in various aspects and business". Said the policewoman, Zuhur Yusef, of Ras Al Khaimah Police. “Today, the Emirati women participate in the police field along with men in various difficult missions, after she became familiar with the principles and instructions in this field. She is a traffic cop, she leads the patrols, exists in the missions and reports, she is able to carry the weapons, exists at the crime scenes, and in the special forces and missions that require the courage, strength and boldness to carry out the missions in the required and distinct manner, and this is the result of the support provided to her by the wise leadership that believes in her ability to go ahead and create in various fields," said Corporal / Sakina Mohammad, Ras Al Khaimah Police.

She emphasized that the Emirati women, as a result of this great and continuous support, will strive to achieve the success and distinction, to prove to everyone that she possesses a high level of endurance and liability in meeting the directions of the state by involving her in the improvement and development process.