Under the Patronage of the Crown Prince of Ras Al Khaimah "Khat" Celebrates National Day 47 November 21,2018 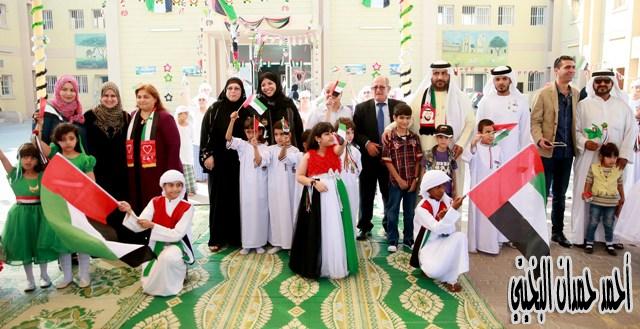 The Naqbiyin tribe and the people of the Khatt area in Ras Al Khaimah have finished their preparations to celebrate the 47th National Day, under the patronage of His Highness Sheikh Mohammed bin Saud bin Saqr Al Qasimi, Crown Prince of Ras Al Khaimah. Plans were conducted in the presence of sheikhs, senior officials, and tribe members.
Mohammed bin Rashid Al-Naqbi, the official of the area, said the celebration is held in Khatt on 23 November, asserting that celebrating this occasion is a national duty in which all express love for this benevolent country. Further, he stated that the activities of the celebration seek to bolster the values of belonging and loyalty to the leadership and the country, as well as to enhance the sense of patriotism and belonging in the hearts and souls of the youth. He also praised the considerable interaction by the governmental and private sectors of the Emirate.
Fahad Khasif Al-Naqbi, head of the celebration's organizing committee, said the preparations began around three months ago, in which a committee of skilled youth from the area was formed. Tasks were distributed amongst them and were followed by periodic meetings and assignments. He noted that the celebration includes heritage and entertainment activities, and has been planned in entirety by the people of the Naqbiyin from Khett area.
He said: “The activities include many surprising and distinguished segments, which will include contests, raffles, and prizes for audience members. Our celebrations and myriad of activities will garner the admiration of all those who attend.”