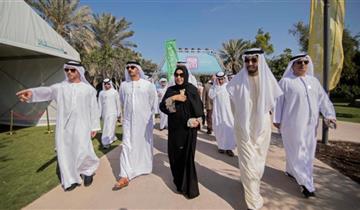 The second Ras Al Khaimah Happiness Festival was launched the day before yesterday. Organized by the RAK Exhibition Center, the festival saw around 3000 visitors. It offers 40 activities held on Al Marjan Island Promenade, 3 malls (Al Manar, Al Naeem and RAK) in addition to Al Qawasim Corniche. The festival is known for its social, entertainment and educational themes.

Mohamed Ali Musabbeh Al Nuaimi, Chairman of RAK Chamber said: “This festival comes as part of the UAE’s plans, initiatives and policies aiming to spread happiness and positivity in community and supporting programs such as happiness festivals and others that focus on the concept of spreading happiness”. He also explained that Ras Al Khaimah will witness the launch of many unique events aiming to achieve satisfactions, entertainment and leisure.

Meanwhile, Mohammed Hassan Al Sabab, Director-General of the RAK Chamber confirmed that the Festival will be hosted in Al Marjan Island, will include an area designated for firework shows that will light up the sky over Al Marjan Island in addition to the distribution of 50 thousand roses and balloons to visitors.