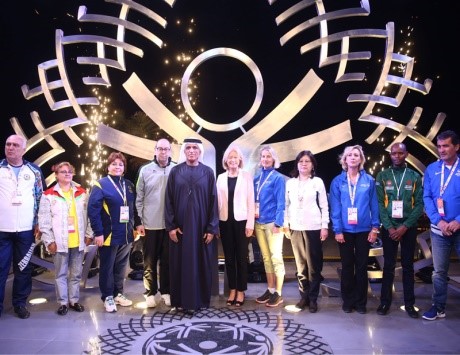 Sheikh Saud added that the UAE is a country of tolerance, compassion and peace, which is reflected in the hosting of the historic event, with the aim of reinforcing the humanitarian values that were established in the UAE by Founding Father, the late Sheikh Zayed bin Sultan Al Nahyan.

Sheikh Saud welcomed the delegations participating in the "Special Olympics Hosting Town Program,” in Ras Al Khaimah. He said:  "Civilized societies do not discriminate against people, and the UAE was a pioneer in integrating the People of Determination in society and utilizing their abilities to serve the UAE. They are partners in the success and achievements in every aspect."

His Highness added: "Hosting the participating delegations across the UAE is an opportunity for communication, and contribution by citizens and residents in organizing this historic humanitarian events."

The event is a part of the program which is organized under the patronage of H.H. Sheikh Mohammed bin Saud bin Saqr Al Qasimi, Crown Prince of Ras Al Khaimah and Chairman of the Ras Al Khaimah Executive Council, under the slogan, "These are the People of Determination.”