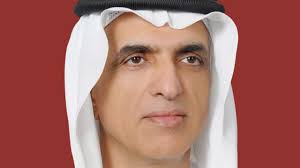 H.H. Sheikh Saud bin Saqr Al Qasimi, Supreme Council Member and Ruler of Ras Al Khaimah, has said that the decision to unify the UAE Armed Forces “represents a milestone in the country’s history, a patriotic occasion and a source of pride for the UAE and its people.”
In a statement to the ‘Nation Shield', the UAE's military journal, marking the 44th anniversary of the UAE Armed Forces’ Unification Day, which is celebrated on May 6th every year, Sheikh Saud said, “We extend our greetings to President His Highness Sheikh Khalifa bin Zayed Al Nahyan; His Highness Sheikh Mohammed bin Rashid Al Maktoum, Vice President, Prime Minister and Ruler of Dubai; and His Highness Sheikh Mohamed bin Zayed Al Nahyan, Crown Prince of Abu Dhabi and Deputy Supreme Commander of the UAE Armed Forces, and members and officers of our armed forces.”
His Highness said: “The historic decision to unify the armed forces on 6th of May 1976, under one flag and under the supervision and direction of one leadership was a milestone that enhanced the UAE’s pivotal role at the regional and international levels. Furthermore, it was a wise step that reflected the insight and comprehensive approach adopted by our founding fathers in laying the foundations of a modern state capable of protecting its capabilities and providing peace and tranquility to its residents. Since its founding, our armed forces were the nation’s fence and shield and a source of pride and confidence for all the citizens and residents of the UAE. Moreover, the UAE Armed Forces constitutes a key pillar that contributed to consolidating and protecting the union, enhancing its journey and preserving its gains against all those who are inclined to compromising the security
of our beloved homeland.”
“Our armed forces’ patriotic spirit and the values of peace and giving it holds, reflect its noble message. The honorable history of our armed forces is a testament to the UAE's message and its pioneering role in promoting peace and stability at the regional and international levels. The UAE leadership’s belief in the importance of creating a strong army in the past years has resulted in a major qualitative leap, and a continuous development of technical and human qualifications in accordance with the highest standards,” His Highness added.
His Highness then continued: “Thanks to the unlimited support of the leadership, our armed forces have achieved many accomplishments at the regional and global levels, to become today a global exemplary model in terms of efficiency, capabilities and qualifications, as well as and a source of pride for the UAE and its people. Today, our armed forces take part in many noble quests, such as providing humanitarian assistance, resolving conflicts and restoring hope and stability in many regions around the world.”
H.H. Ruler of Ras Al Khaimah noted that the sacrifices of our martyrs will remain present and engraved in the memory of the homeland and its children forever.
His Highness also stressed that the 44th Unification Day is an opportunity to honor these sacrifices and recognize and appreciate their acts of patriotism which played a pivotal role in keeping our national flag held high in the fields of pride and honor.”