Ruler of Ras Al Khaimah Celebrating the Values of Pride and Glory on Flag Day November 02,2018 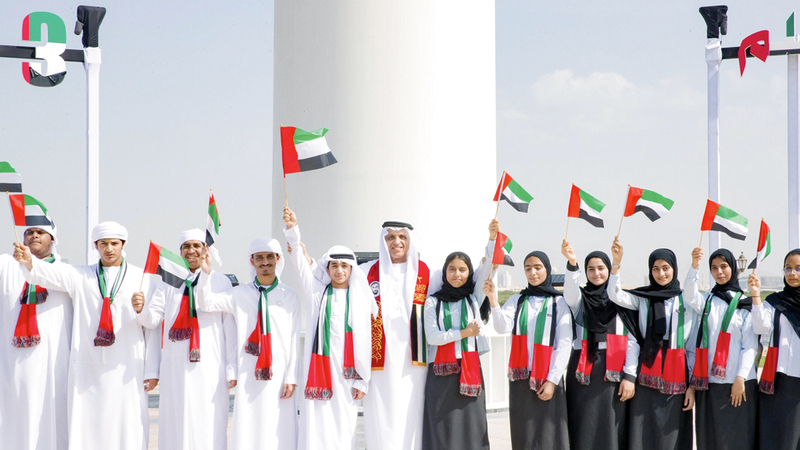 His Highness Sheikh Saud Bin Saqr Al Qasimi, Supreme Council Member and Ruler of Ras Al Khaimah, has said that Flag Day is an occasion to remember the country’s achievements under the leadership of President His Highness Sheikh Khalifa Bin Zayed Al Nahyan.

His Highness expressed his pride in hoisting the flag to commemorate the day His Highness Sheikh Khalifa bin Zayed Al Nahyan became the president of the UAE. H.H. Sheikh Saqr expressed his pride in the wise leadership of H.H. Sheikh Khalifa, and the cohesion of the UAE’s citizens who rally around this flag and the leadership. H.H. Sheikh Saqr also confirmed that the UAE’s flag is a symbol of belonging to this land, and a witness to the strength and determination of the founding fathers. H.H. said: “We will never forget their efforts and determination, and today we continue to spread the message of the UAE of peace and cooperation with people for all walks of life, with our flag as a symbol.”

RAK Crown Prince noted that celebrating the country’s flag reflects its leading international stature under the wise leadership, that provided a decent life for UAE’s citizens and a safe community for its residents.

H.H. The Crown Prince said that this day holds a very emotional and national importance for the citizens of the UAE, as it brings forth the values of unity, loyalty, and cohesion. Hoisting the flag on every house in the UAE is but an expression of the unity of the country and our journey towards a brighter future, filled with achievements.

H.H. The Crown Prince added that celebrating Flag Day is celebrating this symbol of loyalty, belonging, and identity, as well as the achievements of the UAE.

The celebrations included activities with the participation of the music band, members of the presidential guard, and students of RAK Schools. It also included a show by the RAK police air-wing unit carrying the UAE flag.