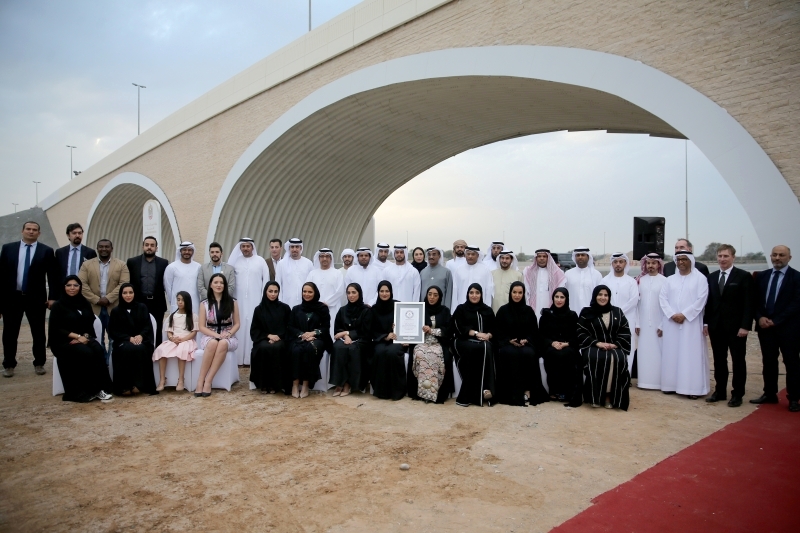 The UAE, represented by the Ministry of Infrastructure Development, claimed Guinness World Record for longest steel arch bridge. The 32.37 meters bridge is part of the Ras Al Khaimah ring road, snatching the title from the 26-meters bridge in Poland. H.E. DR. Abdullah bin Mohammed Balheif Al Nuaimi, Minister of Infrastructure Development, received a certificate from the representative of the Guinness World Records during the ceremony organized by the ministry at the bridge site. The ceremony was attended by Hassan Mohammed Juma Al Mansouri, Undersecretary at the Ministry; and Eng. Jamila Al Fandi, Director General of Sheikh Zayed Housing Program, in addition to assistant undersecretaries, and the company supervising the construction of the bridge.

H.E. Dr. Al Nuaimi dedicated this achievement to His Highness Sheikh Khalifa bin Zayed Al Nahyan, President of the UAE; His Highness Sheikh Mohammed bin Rashid Al Maktoum, Vice President and Prime Minister of the UAE and Ruler of Dubai; His Highness Sheikh Mohammed bin Zayed Al Nahyan, Crown Prince of Abu Dhabi and Deputy Supreme Commander of the UAE Armed Forces; and Their Highness Supreme Council Members and Rulers of the Emirates. He pointed that the vision and directives of the wise leadership made the UAE one of the leaders in development and progress. He also added that the Ministry has been working to help make the UAE one of the best countries in the world by 2021 and achieve the UAE Centennial 2071 vision.

Dr. Al Nuaimi stressed that the Ministry adheres to the highest standards in sustainability in infrastructure projects, based on the directives of the wise leadership. H.E. also pointed that achieving the Guinness record is the result of great efforts by the Ministry's team and is a new achievement by the UAE in general and the Ministry of Infrastructure Development in particular.