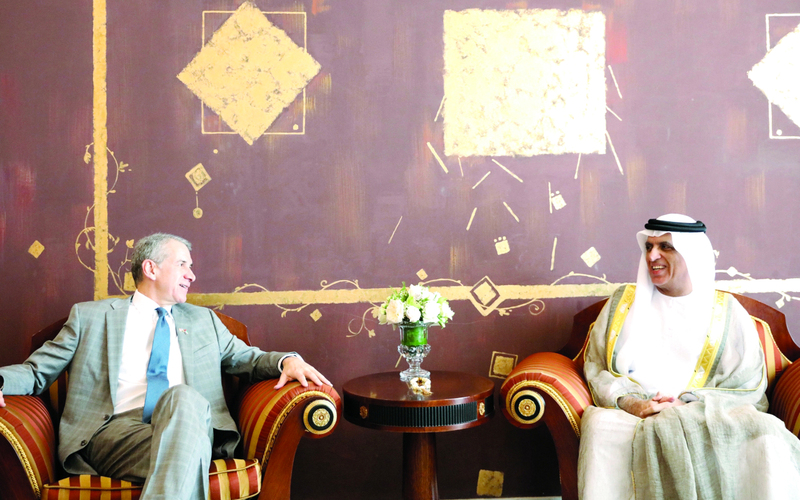 His Highness Sheikh Saud bin Saqr Al Qasimi, Supreme Council Member and Ruler of Ras Al Khaimah, received Philip Frayne, Consul General of the United States yesterday, who came to greet His Highness on occasion of beginning his mission in the state. His Highness the Ruler of Ras Al Khaimah welcomed the US Consul General, wishing him a pleasant stay and all the luck and success in carrying out the tasks of his new appointment to bolster cooperation between the two friendly countries on all levels. Talks during the meeting discussed the standing relations between the friendly nations and their people alongside the means in which to further enhance such multifaceted cooperation.
The meeting was attended by Sheikh Ahmed bin Saud bin Saqr Al Qasimi, Chairman of the RAK Petroleum Authority, Sheikh Saqr bin Mohammed bin Saqr Al Qasimi, President of the RAK Sports and Cultural Club, Mohammed Ahmed Al Keet, Advisor to the Emiri Court, and Rashid Suwaidan Al Khateri, Director General of the Protocols and Hospitality Department