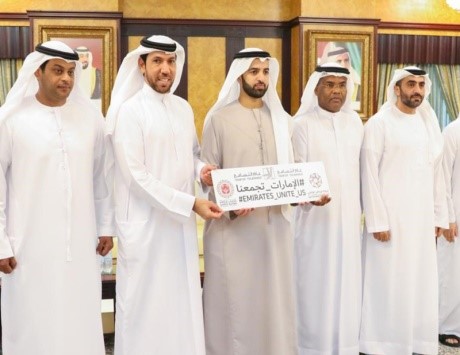 His Highness Sheikh Mohammed bin Saud bin Saqr Al Qasimi, Crown Prince of Ras Al Khaimah, praised the efforts made by the National Olympic Committee to support Emirati sports and athletes, prepare national talent, and train them in various sports, in order to achieve the aspirations and goals of the wise leadership.

His Highness praised the Sports Day Initiative, which is supported by the Vice President, Prime Minister and Ruler of Dubai, His Highness Sheikh Mohammed bin Rashid Al Maktoum, under the theme "Emirates Unites Us" across the country. His Highness stressing the role of sports in the healthy lifestyle of all members of society.
His Highness Sheikh Mohammed bin Saud Al Qasimi made the remarks while receiving, at the Amiri Diwan, a team from the National Olympic Committee, headed by Brigadier Talal Ahmed Al Shanqeeti, Acting Secretary-General of the National Olympic Committee; with the attendance of Brigadier Saleh bin Ashour, Assistant Secretary-General for Technical and Sports Affairs; Mohammed Saeed bin Darwish, Executive Director; Nasser Bu Shalat, Representative of the Communication and Marketing Department; and Salem Mubarak, Representative of Public Relations and Ceremonies.

During the meeting, Sheikh Mohammed reviewed the committee’s plans and programs and the latest preparations for ensuring the success of the Sports Day Initiative, which will be held tomorrow with the participation of the entire community.