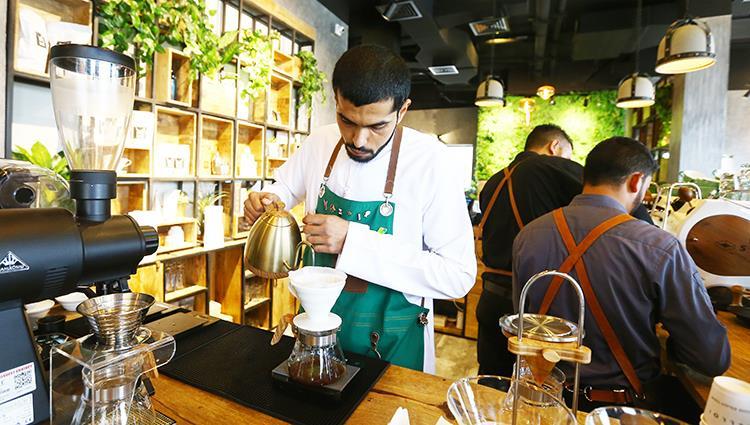 A number of young people from the Emirate of Ras Al Khaimah have successfully embarked on small business ventures, achieving great successes, and entrepreneurs have benefited from the support initiatives provided by many establishments to help SME sector, which has opened the way for Emirati youths to demonstrate their ability to create change and development, and support the economic development of the Emirate.

Mohammed Al Shehhi, the owner of one of the projects, said he decided to enter the world of business by realizing his own project on the ground, which is to open a coffee shop, offering a variety of drinks and foods menus, mainly coffee, after selecting them with care and deliberation.
He praised the wise leadership's keenness for supporting youth projects and entrepreneurs, which is one of the motivating elements for the advancement and development of investment projects, and providing an opportunity to support their small and medium-sized enterprises (SMEs) to realize them on the ground, which is motivated by the leadership's strong confidence in the Emirati youth's ability to be creative and distinct.

For his part, his partner in the project Abdullah Al Habsi said that he is a coffee aficionado, and likes to make it himself, and he holds many international certificates on how to prepare it and select distinctive types of coffee, in addition to roasting coffee beans and other tasks, until the drink is presented in the desired and unique form, adding that their colleague Mohammed Rashid prepares the coffee. He pointed out that several parties provided help, including the Khalifa Fund for Enterprise Development and the Saud Bin Saqr Foundation for Youth Project Development, which provide many initiatives and facilitations for citizens' projects, including exemptions from fees from a number of agencies.

He praised this approach by the authorities for supporting youth projects by reducing some fees in order to launch projects, in addition to free consultations by specialists to improve the projects and ensure their sustainability.

For her part, Ibtisam Al Zaabi, the owner of a women only cafe project, said: "The idea of moving forward with the project came at the suggestion of my daughter, who is still studying, by proposing the idea which I liked, and I provided financial support for her and worked to make the project exclusive for females only to make it stand out from the rest of the projects that began to appear in different locations of the Emirate of Ras Al Khaimah."

She said that she initially began supporting the project without resorting to any help, until it received the support of the Saud Bin Saqr Foundation for Youth Project Development, which included exemptions from the fees of a number of agencies, including licensing fees and other services provided by the Economic Department, the Municipality of Ras Al Khaimah, labor, and workers.

She said that the goal of making the coffee shop exclusive to females group without men is to provide them with the opportunity to have comfort and privacy while they are in the shop, and based on this it was dedicated to women.

Jassim Al Shamsi, owner of another coffee shop project, agreed with the others regarding the authorities' support for SMEs, saying that the procedures for procuring the licenses were very easy, in addition to the great cooperation provided by the employees of the agencies, including the Economic Department in Ras Al Khaimah.

He said That he was determined to start the project, and was able to implement all the requirements very easily, in light of the conducive environment for launching various projects, especially for young people, through the incentives and facilitations provided to them under the support of the wise leadership, since this sector contributes in the field of development.

Incentives
Youssef Ismail, Head of the Supreme Committee of the Saud Bin Saqr Foundation for Youth Project Development, said: "Since its opening in 2008 until last year, the Foundation has provided support for 905 different projects in industrial, professional, and commercial fields for citizens who have SMEs.”

He pointed out that the aim of the establishment of this Foundation is to enhance the competitiveness of SMEs, and to overcome difficulties for all UAE youth who entered the business world and are looking for opportunities to support and continue in it. This is where the Foundation comes in, providing a package of initiatives, including cooperation, coordination with relevant sides, providing incentives and exemptions, and to provide resources to elevate them.
He pointed out that among the exemptions granted to the entrepreneurs who are members in the Foundation are exemptions from the local commercial license fees, including the Department of Economic Development, the Municipality Department, the Department of Environmental Protection and Development, and the General Services Department, adding that there are several types of membership for beneficiaries, including entrepreneurs, industrial land, people of determination, and business centers memberships.

He said that the beneficiary can apply to take advantage of the initiatives of the Foundation through the website, and the application takes only 10 minutes, noting that along with those benefits, the Foundation provides workshops and consultations for up-and-comers in this field through the organization of training programs throughout the year, in cooperation with training service providers.

Tasaheel Initiative
The Department of Economic Development in Ras Al Khaimah launched a series of projects and initiatives supporting such projects, including the Tasaheel Initiative. Mohammed Al Mahmoud, Deputy Director General of Ras Al Khaimah Economy Department, said: "This initiative is one of the initiatives launched by the Department to support commercial projects by citizens by providing several facilitations, including obtaining licenses without the need to pay fees for a year for the practice of general trade."

He added that the Department has issued 50 licenses in 2018 within this initiative provided to citizens so that they can proceed with the management and launch of diversified business projects, noting that this initiative will enable citizens to start their businesses at the lowest costs.

He stressed that this initiative, which provides great support to citizens since the beginning establishing their own business, will help motivate them, along with other support initiatives provided by the Department such as business education workshops, and allowing them to present their diverse projects to consumers by including them in the various exhibitions that are always being held.

Start Your Business
He noted that "Start Your Business in 15 Minutes" is one of the most important national initiatives that are in line with the UAE's directives for developing a flexible and advanced business environment.

He added: "The work domain of the virtual merchant initiative covers all commercial projects run via social networking, websites, and smart apps by UAE citizens and residents in Ras Al Khaimah who use their method to conduct their business form home."