Cooperation between RAK Police and the Swiss Council September 17,2018 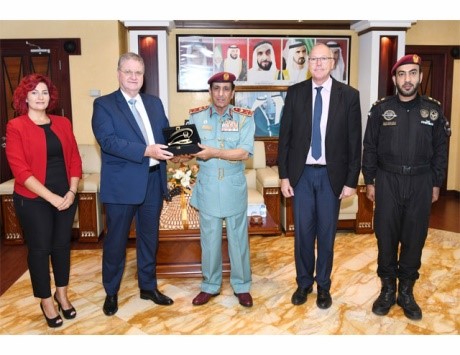 The Commander-In-Chief praised the good relations between the two countries and the coordination and cooperation level in the security fields. During the meeting, the two sides discussed means of developing continuous cooperation, strengthening relations and enhancing security and safety in accordance with the strategy of the Ministry of Interior and supporting all knowledge initiatives through sharing mutual experiences and expertise, which serves both sides.

The Swiss Council complimented the good security reputation of the UAE in general, and Ras Al Khaimah in particular, praising the UAE leadership for being distinguished globally in keeping security and order, which has enhanced the country's excellence and status enabling it to advance to a high rank among elite countries around the world.