28 Countries Participate in the World Championships in Aerial Sports April 10,2021 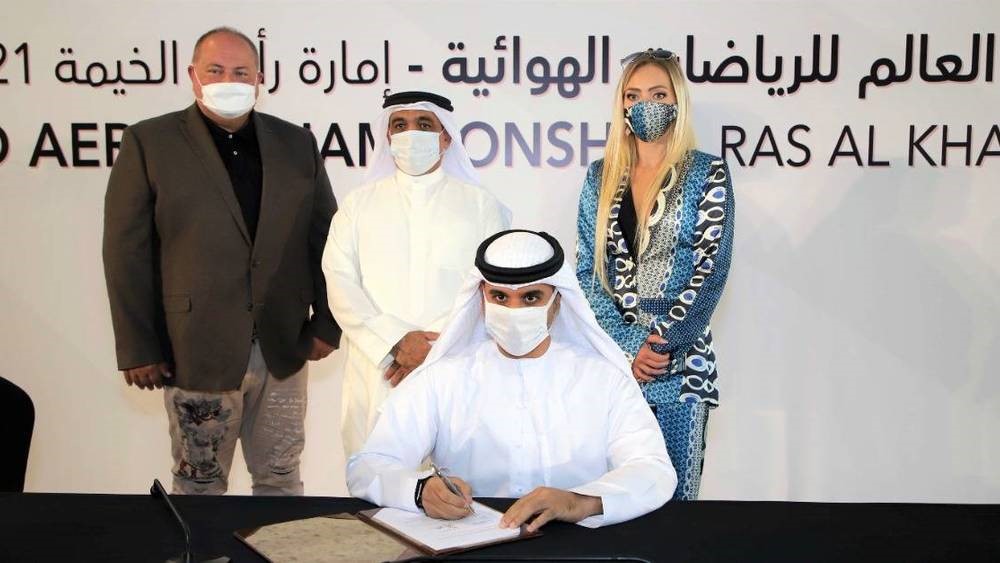 The Ras Al Khaimah Exhibition Center affiliated with the RAK Chamber of Commerce and Industry announced that it will organize the World Championships for Aerial Sports, Ras Al Khaimah, 2021, in cooperation with the International Sports Network Organization (ISNO). This 2021 tournament is being organized for the first time in the Middle East and hosted by the Emirate of Ras Al Khaimah. The championship will be held at the Hamra International Center for Exhibitions and Conferences in the Al-Jazirah Al-Hamra from next 24 to 28 September with the participation of more than 28 Arab and European countries.
This took place during the press conference held by the Ras Al Khaimah Exhibition Center at the Al Hamra International Exhibition and Convention Center, in which Mohamed Musabbeh Al Nuaimi, Chairman of Ras al Khaimah Chamber of Commerce and Industry, announced the features of the first edition of the championship to be held for the first time in the United Arab Emirates. The press conference was held in presence of Mohamed Hassan Al Sabab, Director of Exhibitions Centre and Acting Director of RAK Chamber of Commerce and Industry, Agata Krzywka and Robert Brzmislau representatives from the International Sport Network Organization, Polish partner of the championship organizer as well as all media.

Mohamed Musabbeh Al Nuaimi said “Today, the Emirate of Ras Al Khaimah has succeeded, as usual, in hosting international tournaments and events. Yesterday was the launch of the International Stevie Award and today the World Championships in Aerial Sports. We continue to bring more international events".
Al Nuaimi stressed that hosting of this international championship by Ras Al Khaimah could mean hosting of the participants from professionals and amateurs, as well as those who love it and who love to watch it. The contestants who are registered for the event till now are coming from over 28 counties from all over the world, and the registration is still open for participation in the championship, before its launch in the upcoming 24th September and hence participating countries are expected to reach more than 45 countries.
Al Nuaimi added that “Our success in bringing this global event coincides with the official launch of the "Year of Fiftieth" to celebrate the 50th anniversary of the founding of the UAE and its Golden Jubilee. Let every Emirati and resident of this country be proud as UAE has become the focus of attention of the whole world thanks to its daily achievements as well as the Emirate of Ras Al Khaimah, by hosting this tournament and the previous world tournaments and awards, has also become the focus of attention for followers of the tournaments, awards and international events. Today, air sports fans around the world follow this event and the preparations of our hotels, centers and all tourist resorts to receive tournament guests, at the highest level.
He continued: “There are about 13 clubs in the UAE distributed over all the emirates of the country to practice this activity and its membership includes thousands of all Arab and European nationalities".
Mohamed Hassan Al Sabab, Acting Director of Ras Al Khaimah Chamber of Commerce and Industry said “the World Aerial Sports Championship in Ras Al Khaimah is organized by Ras Al Khaimah Exhibitions Centre and managed by International Sport Network Organization, contestants from the participating countries will participate in it, and compete over a period of 5 days from next 24 to 28 September at the Hamra International Center for Exhibitions and Conferences. The championship shall witness a competition of 5 age groups from male, female contestants and 8 sections of the Aerial sports, and the competitors shall be announced on the 1st of September”.
Al Sabab added that there are events to take place at the margins of the championship with which the participants from all countries will be pleased while tours shall be arranged to the tourism attractions in the Emirate among many other surprises that shall be announced in the due course.
It should be noted that the participating countries in the championship are the United Arab Emirates, Austria, Belarus, Bulgaria, China, the Czech Republic, Kazakhstan, Malta, Poland, Romania, Russia, Spain, Switzerland, Thailand, Ukraine, Australia, Belgium, Brazil, Canada, Greece, India, Italy, Netherlands, South Africa, Slovenia, Sweden, UK and USA